Prisoners with Disabilities – Discussion from a Social Security disability lawyer

Being incarcerated is a highly challenging experience for anyone. But for prisoners with disabilities the system is particularly unforgiving.

America has the highest incarceration rate in the world, with 693 prisoners per 100,000 people. People in prison are three times more likely to be disabled than the general population. 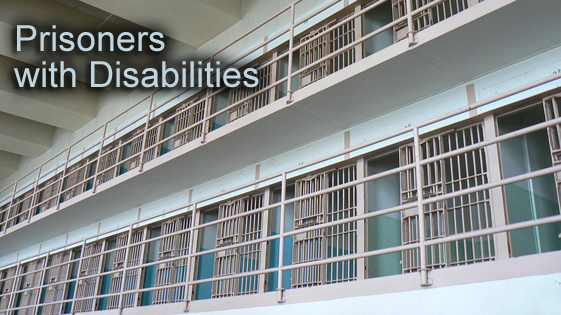 Prisoners with Disabilities. Being incarcerated is a highly challenging experience for anyone. But for the disabled the system is particularly unforgiving.

About one third of inmates have some sort of disability and over half have a mental health problem of some kind.

Prison is not an easy place for anyone, and it’s not supposed to be. However, lack of access to mental health care has caused the mentally ill to end up in prisons which are unable to accommodate their special needs.

According to 2004-2005 data, there are three times as many persons with serious mentally illnesses in prison than in hospitals.

21% of inmates suffer from depression, and 12% suffer from bipolar disorder. The practice of imprisoning the mentally ill is particular prevalent in rural areas, where access to mental health treatment is inadequate. The majority of mentally ill inmates are put in prison for minor drug-related offenses.

Prisoners with disabilities such as mental illness face worse treatment in prison.

Prisoners with disabilities are more likely to be placed in solitary confinement in order to segregate them from the other prisoners. Solitary confinement has been shown to exacerbate existing mental conditions and perhaps cause mental problems in otherwise healthy individuals. Mentally ill prisoners are frequently isolated and discriminated against, often being restricted from entering special programs such as those for vocational training or substance abuse abatement. Thousands of cases alleging ADA violations have been filed against prisons, but it is difficult for an inmate to present their case successfully. Additionally, prisoners with mental illness are far more likely to experience abuse and mistreatment from guards, and twice as likely to be sexually assaulted.

Suicides are a major problem, particularly in county jails where suspected criminals first come into contact with the justice system.

42% of suicides in county jails occur within a week of arrest. When a new prisoner arrives at jail for the first time, they undergo a mental and physical examination. If they are at risk for harming themselves, they are supposed to be put on suicide watch, but often are not (as was the case in the famous Sandra Bland incident). Nearly a third of those who die in prison take their own life.

Healthcare is simply inadequate in prison, and correctional officers are often untrained in how to handle prisoners with disabilities special needs.

There have been multiple reports of prisoners with ambulatory issues being denied access to assistive devices and being forced to crawl. One story from New Mexico describes a situation where a man was not allowed to have his prosthetic leg and had to hop around.

If you have been incarcerated for more than a month you will need to reapply for disability benefits. Contact an experienced Social Security disability lawyer at 512-454-4000 for help.

Another serious issue that disabled people often face when they go to prison is lack of support from the outside.

Unfortunately, Social Security will not pay benefits to an individual who is incarcerated. If you are currently receiving Social Security Disability Insurance (SSDI) or Supplemental Security Income (SSI) and you go to prison or jail for over a month, you will lose your benefits and you will have to reapply upon release.

Social Security benefits are often an essential means of financial support for disabled individuals. However, it can be difficult to get on benefits because the Social Security Administration denies two-thirds of initial applications. If you have applied for Social Security Disability benefits and been denied, contact the Law Office of Bemis, Roach and Reed for a free consultation. Call 512-454-4000 and get help NOW.

Do I have to go to the lawyer’s office to get help with SSDI?
What if the SSDI beneficiary is not capable of managing their benefits?
Disabling Conditions- List of impairments