In the Words of Our Clients 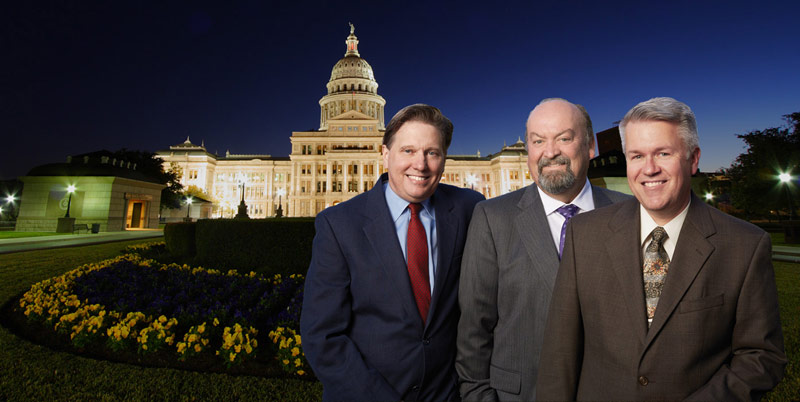 See what some of our clients have to say:

The basics of Robert Scheuermann’s story are like many others’. He suffered an on-the-job injury and was told to get medical attention by his employer. Doctors found that his L4 and L5 discs were crushed and surgery would be necessary. Though his employer wasn’t covered by Workers Compensation, Mr. Scheuermann was laid up long enough to qualify for long term disability benefits.

Unable to work, and without any income, Mr. Scheuermann found an ad for Austin firm Bemis, Roach & Reed. When he called, he was told Attorney Lonnie Roach could provide assistance. Not only did Mr. Roach take Mr. Scheuermann’s long term disability case and begin the appeal process, law partner Greg Reed assisted him in filing for and obtaining Social Security Disability Insurance. Though the appeals process was long, Bemis, Roach & Reed stood by Robert Scheuermann until his long term disability case was won.

“Everyone on staff gives you an indication that you are an individual that you are a person.
If I have any other difficulties I will definitely come back to them, I have referred several clients over to them.”

Greg Reed talks about the importance of hiring a local attorney at a small firm to receive personalized attention and benefit from building a strong relationship with your attorney.
Mr. Reed stresses how disability claims are often denied by Social Security and insurances companies and that clients and other attorneys frequently refer cases to Bemis, Roach and Reed.

“I don’t think I was really thinking about how important Greg was going to be. I just know he came in and he just took over, and he knew exactly what needed to be done. It was a load off.
Greg always informed us on how things were going to go. He let us in on everything, we never had to call down here.
Whenever friends or family call in and ask who was your lawyer I always say Bemis, Roach and Reed.”

Lawrence S. and his wife speak about the life altering experience of being hit by a drunk driver and the difficulties they encountered because of it. They emphasize how important it is to find the right lawyer who will give you personal attention and keep you informed about the legal process each step of the way.

Greg Reed – What is Disability?

Partner Greg Reed speaks of the immense difficulty of being disabled and how Bemis, Roach and Reed can be of assistance in these very challenging circumstances.

Mr. Reed points out that a client’s first reaction to receiving a devastating rejection letter typically is to appeal the decision immediately without providing any new information which will only cause them to be rejected once again. At times like this, Mr. Reed explains they really do need legal guidance.

Partners Lloyd Bemis, Greg Reed and Lonnie Roach speak to the difficulties and nuances of pursuing a long-term disability claim.

They discuss how long term disability companies are governed by ERISA (Employee Retirement Income Security Act of 1974) and how that affects disability claims and methods of overturning negative determinations. They talk about Mr. Roach’s vast experience and success in his ERISA disability practice.

Lonnie Roach – “What is ERISA?”

Partner Lonnie Roach discusses how private long term disability claims are not actually insurance claims but ERISA claims and that often the human resource department where a client is employed will file the initial claim.

He describes the typical process of being denied disability and how insurance companies will often deny a claim and then attempt to justify the denial afterwards. He discusses what the first steps should be for any individual who has been denied private long term disability insurance.