People with intellectual and developmental disabilities (IDD) face many challenges when attempting to live independently. Their limitations impact their intellectual functioning, cognitive ability and physical ability and include diagnoses such as cerebral palsy and Down Syndrome 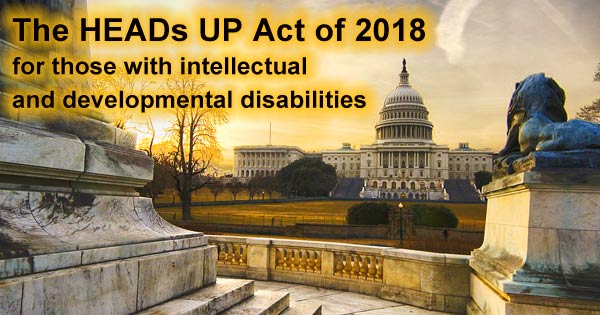 The Head’s up Act of 2018 would open up over 25 government programs within the Health Services and Resources Administration and other federal agencies for participation by people with intellectual and developmental disabilities.

It has been found that people with IDD participate more in their communities when not burdened by poor health, but accessing proper healthcare and the resources needed to change conditions affecting their health is often difficult.

In the past, people with intellectual difficulties were often institutionalized and received all their healthcare in private or state-operated facilities. Research shows that today people with intellectual and developmental disabilities have a hard time finding competent medical providers, have a higher rate of chronic conditions such as cardiovascular disease, and are less likely to receive routine health screenings.

Some of the barriers to quality healthcare people with IDD face are:

If you have been denied disability benefits don’t give up! Contact a Disability lawyer at 512-454-4000 for a free consultation and get the benefits you deserve.

Because of these barriers to healthcare resources and primary care, illnesses and health issues are often not addressed until they require extensive and expensive care.

Progress on this issue has been slow resulting in a gap between the healthcare needs of people with IDD and the care they are able to access.

This month, to coincide with the 50th anniversary of the Americans with Disabilities Act, Representative Seth Moulton of Massachusetts and Representative Greg Harper of Mississippi introduced a new bill to designate people with IDD as a Medically Underserved Population, or MUP.

Known as the HEADs Up Act of 2018 (Healthcare Extension and Accessibility for Developmentally Disabled and Underserved Populations), this bill would open up over 25 government programs within the Health Services and Resources Administration and other federal agencies for participation by people with IDD. The MUP designation was originally created in 1996 to identify areas with too few primary care providers, high infant mortality, high poverty or a high elderly population. The Department of Health and Human Services defines the “underserved” as communities that include members of minority populations or individuals who have experienced health disparities. Even though there is evidence to qualify people with IDD as an MUP, they have not been designated until now, partly because this population is not localized into a particular area of the country.

The benefits this bill would provide include:

This bill is a big step forward for children and adults with intellectual and developmental disabilities and endorsed by the following organizations:

“The health disparities for people with Intellectual and Developmental Disabilities are well documented, as is the challenge that so many people with I/DD face in simply finding providers properly trained and willing to treat them. This bill takes one more step towards helping us realize the promise of accessibility made with the Americans with Disabilities Act.”

What is Artificial Disc Replacement?
What terms should I know when filing or appealing a disability claim with the Social Security Administration?
Can Spinal Stenosis qualify for SS Disability Benefits?