What does the Social Security Administration say about qualifying for disability while suffering from the effects of Essential Tremor?

Essential tremor (or “ET”) is a neurological disorder that causes involuntary shaking in an area of the body. Also known as familial tremor or hereditary tremor, the hands and forearms are most often affected, but tremors can also occur in the head, face, tongue, neck and torso. Essential tremor is one of the most common neurological disorders in adults, but can begin at any age and affects approximately seven million people in the United States. 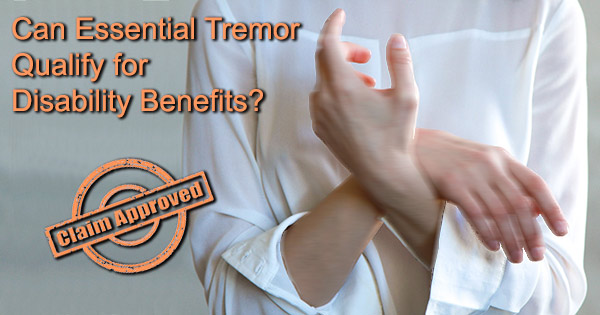 Though the SSA does not list essential tremor specifically it does acknowledge the effects of the disorder. You must show that you don’t have the ability to function at a sedentary job.

A tremor is an involuntary, rhythmic movement of a body part.

Tremors may be constant, frequent, or occasional and minor or severe. Both sides of the body are usually affected, but may not be equally affected. Most people with ET experience tremors while performing a daily task, such as tying their shoes or pouring a drink. These are called action tremors. Tremors can also occur while not moving; for example, sitting in chair with an arm resting. These tremors are known as tremors at rest.

The following are examples of commonly experienced tremors:

Some individuals will experience other motor symptoms such as walking in an unsteady manner, while others may develop depression, anxiety or cognitive impairments.

Diagnosis involves observing the tremors and ruling out other causes.

A doctor will perform an exam to evaluate the severity of the tremors and in some cases order imaging tests such as a CT scan or MRI to determine if there is another condition responsible for the tremors, such as Parkinson’s disease. It is important to note that while Parkinson’s disease may cause tremors, it is not an underlying cause of essential tremor.

Contact a Social Security disability attorney at 512-454-4000 for a free consultation and see if you can get disability benefits while suffering from Essential Tremor. If you have been denied disability don’t give up!

The progression of ET is slow and gradual.

Treatment of ET focuses on relieving symptoms and in cases where symptoms are minor, treatment may not be necessary. Medications may be prescribed to limit adrenaline and prevent tremors from getting worse. Physical therapy can improve muscle control and coordination. Botox injections in the hands and neck may weaken muscles and minimize or stop shaking.

As a last resort, surgical procedures may provide relief of symptoms in extreme cases:

As with many other conditions, maintaining a healthy lifestyle and avoiding the following can help minimize symptoms:

The exact cause of ET is unknown, but researchers believe environmental and genetic elements are involved.

ET may be inherited (“Familial Tremor”), but the disorder also occurs in people with no family history. If you have essential tremor, there is a 50% chance that your child will develop the disorder.

There is no doubt that essential tremor can severely impact an individual’s social interactions and daily activities.

Eating, drinking, writing, and dressing may become difficult and a person may no longer be able to function at their job. Though the Social Security Administration does not list essential tremor specifically as an impairment in its Blue Book, it does acknowledge the effects of the disorder under Section 11.00 Neurological:


In order to qualify for Social Security Disability Income, you must be able to show (1) that your tremor has prevented you, or is expected to prevent you, from working for at least 12 consecutive months, and (2) that you don’t have the ability to function at a sedentary job or that your tremor fulfills the requirements for Social Security’s impairment listing for Parkinson’s disease.

In considering your case, Social Security will perform a Residual Functioning Capacity assessment to evaluate how tremors affect your ability to perform strength-related tasks and your non-exertional (non-strength) impairments. Strength related tasks include lifting, carrying, walking and standing. Non-exertional impairments include difficulty using the hands and fingers for handling objects, difficulty stooping and crouching, and difficulty caused by anxiety, depression or nervousness. If you have the ability to perform a job while sitting, it’s likely that your claim for SSDI will be denied. If the SSA concludes that tremors prevent you from performing a full range of physical activities required by a sedentary job, you may be approved. In submitting your claim, it is important to include – in writing in your medical records – any and all non-exertional limitations you may have where strength-related abilities are not affected by tremors.

If you have tremors in two extremities, such as both hands, and can provide evidence that your symptoms and limitations are as severe as Parkinson’s disease or another similar medical condition, you may meet the requirements of that impairment and be approved.

For example, if you are unable to control the movement in both hands or arms even with three months treatment.

Applying for Social Security Disability Income under essential tremor can be tricky and it’s best to have a qualified disability attorney by your side.