Can I get disability benefits if I am suffering from the effects of Psychosis?

You could possibly get disability benefits for Psychosis, there are many factors involved. 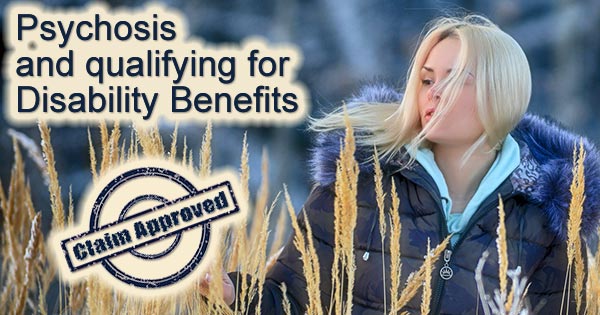 If you are suffering from Psychosis you may qualify for disability benefits, if you have been denied benefits you should consider appealing the decision. Call 512-454-4000 and talk to a dedicated disability lawyer today

Psychosis is recognized as an impairment in Social Security’s Blue Book under Section 12.03, a listing that includes schizophrenia spectrum and other psychotic disorders. Schizophrenia is the most common disorder in this category, but other mental disorders are included in this listing, such as schizoaffective disorder, delusional disorder, brief psychotic disorder and substance induced psychosis.

Approximately three out of 100 people will have a psychotic episode at some point in their lives, though actually less than one percent of people in the United States suffer from a psychotic disorder.

Psychosis is a condition where a person loses touch with reality and experiences the world differently from other people. It can be a one-time experience or linked to other conditions and usually affects people for the first time in their late teens or early adulthood.

Even before the first psychotic episode (known as an FEP) occurs, a person may show changes in the way they think or act.

This is called the prodomal period and can last days, weeks, months, or even years. In many cases psychosis is connected to a primary mental disorder such as schizophrenia or bipolar disorder, but it can also be caused by an illness, substance abuse, stress, or trauma. Episodes resulting from drug use or a medical condition usually disappear quickly and do not return, provided the original disease is treated.

The first signs of psychosis begin gradually with changes in the ways a person understands and thinks about the world.

Some changes in behavior that you or others might notice include a drop in grades or job performance, uneasiness when around others, and expressing stronger emotions than situations call for or no emotions at all.

Other symptoms of early psychosis include:

Hallucinations and delusions are common examples of psychotic episodes.

In addition to the symptoms above, a person may feel someone touching them who is not there. They may also hold on to beliefs that feel real to them, but make no sense to others. These beliefs are not the same as religious or spiritual beliefs; for example, a person might believe that they have special powers or that someone is going to harm them.

Contact a Social Security disability attorney at 512-454-4000 for a free consultation and see if you can get disability benefits while suffering from a form of psychosis. If you have been denied disability don’t give up!

Doctors don’t know exactly what causes psychosis, but it can be linked to a variety of risk factors:

Psychosis is diagnosed by a psychiatrist or psychologist who will look for the cause of symptoms and related conditions.

Treatment involves anti-psychotic drugs, psychotherapy and hospitalization if the person is at risk to others or themselves.

Qualifying for Disability Benefits for Psychosis

Psychosis is recognized as an impairment in Social Security’s Blue Book under Section 12.03, a listing that includes schizophrenia spectrum and other psychotic disorders.

Schizophrenia is the most common disorder in this category, but other mental disorders are included in this listing, such as schizoaffective disorder, delusional disorder, brief psychotic disorder and substance induced psychosis. To qualify for SSDI you must be able to provide medical documentation of a psychotic disorder that has existed for at least two years. You must also show that your condition limits your ability to function in a work environment so severely that you are unable to work.

To be eligible for SSDI under a diagnosis of psychosis, you must provide:

Most initial claims for benefits are denied. If you would like help applying for benefits or appealing a denied claim contact us today for a free consultation. Call 512-454-4000 and get help NOW.

Social Security acknowledges that there are some people who do not meet the criteria of the listing because they live in a supervised situation, such as a hospital or nursing home, where their functional limitations appear better than if they lived on their own where the stress of daily life would be greater.

Social Security is more interested in a person’s functional limitations than a specific psychotic diagnosis.

An applicant must be able to prove they can’t work even though they are following treatment. Some applicants who suffer from psychosis and do not meet the requirements of the listing are still unable to hold any job. These applicants may not exhibit the stereotyped symptoms of psychosis, such as hearing voices, but they are unable to maintain organized thought patterns or have difficulty with social interactions. If an applicant can prove that their impairment is ongoing and is so severe it prevents them from performing even unskilled labor, they may qualify for SSDI on the basis of a medical-vocational allowance.

Applicants who suffer from a complex mental disorder like psychosis should consult an experienced disability attorney.

Because a person with psychosis frequently experiences difficulty with concentration, memory, and dysfunctional thought patterns, they may not be capable of representing themselves. A qualified disability lawyer can obtain medical records and physician statements and manage appeals and hearings, making a positive result much more likely.

In order to qualify for Social Security Disability, you will need to satisfy a few specific requirements in two categories as determined by the Social Security Administration.

The first category is the Work Requirements which has two tests.

The second category is the Medical Eligibility Requirement.

More details can be found on our Qualifying for Disability page.