Pokémon Go has raised some questions about accessibility for gamers with disabilities.

The game requires players to walk around and interact with each other in order to catch Pokémon, hatch eggs and take over gyms. However, some people with disabilities feel left out. 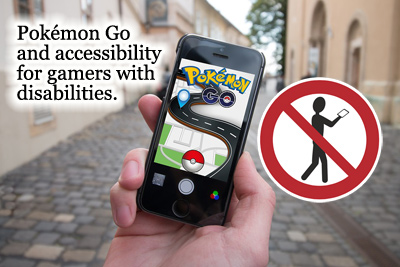 The game requires players to walk around and interact with each other in order to catch Pokémon. However, some people with disabilities feel left out.

In the six days since its release on July 6th, 2016, Pokémon Go had 25 million active users, making it the most popular mobile game in the United States.

The game rivals Google Maps in terms of data usage and daily active users. The average Pokémon Go player uses the app for 33 minutes per day, while the average Facebook user spends 22 minutes per day on Facebook. The game has been explosively successful. One of the biggest reasons for the game’s success, besides nostalgia for the adventures of Ash and Misty, is the game’s use of augmented reality.

Augmented reality is a digital overlay above the real world.

It can be as simple as the yard line display for a football game, or as advanced as a military tactical device that points out the location of enemy combatants. As the technology becomes more advanced and more applications are discovered, its use will become more widespread. Pokémon Go is not the first game to use this concept. Researchers in Australia designed a version of the popular game Quake that used augmented reality, but it required a helmet and other special hardware to play. Ingress was another popular augmented reality game, and was designed by the same publisher as Pokémon Go. However, no other augmented reality game has come close to the popularity and commercial success of Pokémon Go.

Many players claim Pokémon Go has helped them exercise and meet other people playing the game.

Anecdotally, a lot of people feel the game helps with their depression and anxiety. The game requires players to walk around and interact with each other in order to catch Pokémon, hatch eggs and take over gyms. However, some people with disabilities feel left out. Ablegamers is a charity foundation dedicated to helping make gaming accessible for the disabled. They have complained that the two major gameplay mechanics- walking to catch Pokémon, and catching Pokémon by sliding your finger on the screen – could be difficult for those with mobility or motor control issues.

Ablegamer’s review of the game suggests it is still playable for those confined to a wheelchair and they have proposed several simple fixes to help make the game more accessible.

One suggestion is a mode that allows the player to move around in the game without having to move in real life. Many gamers complain this ruins the point of the game and would be used by able-bodied people who simply didn’t want to walk. Some programmers have come up with a way to move in-game by tapping on the screen, but the modification requires technical knowledge to use and is recognized as cheating by Niantic, Pokémon Go’s developer. 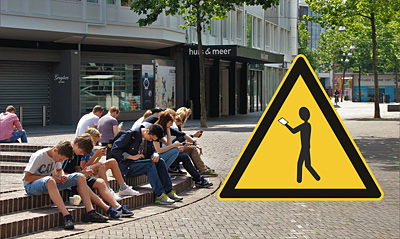 One suggestion is a mode that allows the player to move around in the game without having to move in real life. Many gamers complain this ruins the point of the game and would be used by able-bodied people who simply didn’t want to walk.

While these issues may seem trivial, especially to those who do not play Pokémon Go, they are important as they establish precedent for augmented reality in the future.

The popularity of the game has created issues that have not come up before. Security, privacy, property rights are all big concerns with this new technology. The law is often slow to adapt to technological advances. Law is based on precedent, and it can take a long time for a pattern of consensus to emerge when it comes to new issues.

It is unclear whether augmented reality falls under the ADA which requires physical spaces to be accessible to the handicapped.

Because the law moves slowly when it comes to tech, it is still being debated what should be required of digital spaces (websites) as far as accessibility. In general, the ADA requires as much accommodation as is reasonable without requiring “significant difficulty or expense” on behalf of the business owner. It’s difficult to speculate on what that would mean for augmented reality applications and games.

Of course, for those with disabilities, there are more serious issues than whether they reach the nearest Pokéstop.

Many people with disabilities are unable to work. Social Security Disability Insurance provides benefits for those who have become too injured or ill to work. For those who can’t work, these benefits are essential. For over 70% of people who receive Social Security benefits, the benefits represent half or more of their total income.

If you are unable to work due to a disease or injury, you may be eligible for Social Security Disability Insurance. If you are interested in applying for benefits, or have previously applied for benefits and been denied, the social security attorneys at Bemis, Roach and Reed can help you with your application. Contact us today for a free consultation. Call 512-454-4000 and get help NOW.