Further progress for Americans with Disabilities

As discussed in Part 1, Franklin D. Roosevelt created the Social Security program in 1935. The program didn’t provide support to the disabled, but it helped set an important precedent. Prior to this time, those with disabilities would be institutionalized under unacceptable conditions. Social Security was a turning point in how those who could not work were treated. Many cultural trends from the 30s through the 90s culminated in better treatment for the disabled. 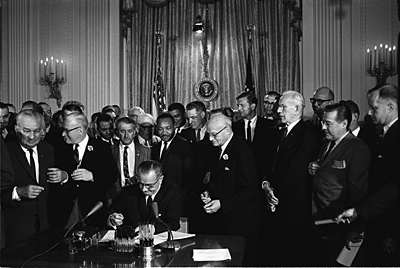 The 1964 Civil Rights Act, originally enacted to protect minorities and women, was eventually expanded (in 1990) to prohibit discrimination against those with disabilities.

In the late 1930s, civil rights movements, technology and culture all made positive changes for the disabled.

The League of the Physically Handicapped was established in New York in 1935. The organization fought to include disabled Americans in Roosevelt’s jobs programs. Around this time, the folding wheelchair was invented. The technology helped disabled people access opportunities they could not before. In the cultural sphere, Ray Charles and Lou Gehrig were gaining popularity for overcoming their handicaps.

Eugenics was a popular philosophy in the early 20th century, but after the World Wars, it became clear that perspective was not the appropriate way to treat those with disabilities.

When the disabled and injured were the heroes who fought in the wars, it was harder to justify poor treatment. It is well known the Nazis were proponents of eugenics and the philosophy fell out of favor after World War II.

In the 1950s and 60s, significant progress was made for the disabled.

Veterans disabled in the war formed strong political organizations. In 1950, the Social Security program was expanded to provide for those over 50 who were disabled; by 1960 the age requirement was removed and any permanently disabled American could receive benefits.

During this time, civil rights movements for women and African Americans were shifting perspectives towards a more inclusive society.

The 1954 case Brown v Board of Education famously desecrated schools, but also set a legal precedent which lead to the mentally handicapped being able to attend school in the 1970s. Similarly, the 1964 Civil Rights Act, originally enacted to protect minorities and women, was eventually expanded (in 1990) to prohibit discrimination against those with disabilities.

1968 was the year of the first Special Olympics.

In 1968, the year of the first Special Olympics, the Architectural Barriers Act was passed.

This act set the precedent for modern accessibility laws. The Architectural Barriers act mandated that any building constructed with federal funds (including many post offices, libraries, and museums) would be accessible to the handicapped.

The 1970s saw many more advancements for the disabled. In 1973, any institutions receiving federal funds were prevented from discriminating on the basis of disability.

In 1980s (the International Decade of Disabled Persons), civil rights continued to expand for the disabled community.

Many organizations for the disabled began in the 80s, including National Council on Independent Living, World Institute on Disability, Job Accommodation Network, and The Society for Disability Studies. Federal laws were passed helping the disabled gain access to housing and transportation.

The ADA has been a monumental victory for those with disabilities. The new law requires places of business to accept the disabled as workers and customers. The disabled were now seen as people to be included, rather than isolated and institutionalized.

By the 90s, disability no longer meant being confined to an institution.

The disabled were able to live on their own with Social Security Disability Insurance, able to communicate with through technologies such as closed captioning and braille, and exerting more political influence than ever before. In 1990, George Bush signed The Americans with Disabilities Act into law.

The Americans with Disabilities Act extends the protections of the Civil Rights Act to the disabled.

The law has 5 different “titles” or sections:

The ADA has been a monumental victory for those with disabilities. The new law requires places of business to accept the disabled as workers and customers. The disabled were now seen as people to be included, rather than isolated and institutionalized.

Today, if you have been injured or become ill, you don’t have to worry about being put in an almshouse. However, disability is still financially devastating. Social Security provides benefits to those who are unable to work due to a disability. If you are interested in applying for Social Security benefits, or if you have applied for Social Security benefits and been denied, you may want to hire an attorney. Social Security can be complex and the application process can be difficult. Having a knowledgeable, experienced disability attorney on your side can help make the experience of applying for benefits easier. Contact the attorneys at Bemis, Roach and Reed today for a free consultation. Call 512-454-4000 and get help NOW.